Amatic was established in Austria in 1993 and began as a provider of software to land casinos. It has been supplying casino games to European casinos for over two decades and has developed a number of popular games such as Team Master Dart and Hot & Wild, as well automated roulette tables, including two-reel games. Having operated in the online casino industry for 18 years, they joined the online revolution in 2011 and have since transferred many of their popular land-based slots titles to online play.

As relative late comers to the online casino industry, Amatic software is not at the forefront of technology. New Zealand gamers looking for the latest in high-definition graphics and blockbuster TV and film-themed titles will be disappointed in Amatic’s selection.

But although they may not offer cutting edge slots, in their online games, they have focused on what they do well and on bringing the simple thrills of land casino games to a global audience. Their roster of games is dominated by straightforward, often retro games that may not be able to compete with modern slots titles for features and gimmicks, but which all offer solid entertainment, and that will certainly appeal to traditionalists.

Most of the online Amatic slots games feature five reels, and there is a fairly wide selection of titles with most of the company’s land-based casino games having made the transition online. Given that they are a relatively small company by modern standards, their range is reasonably good, and although most of the games feature the old-fashioned fruit symbols, they have been given an online makeover to bring them into the twenty-first century, with high quality light and sound additions to add to the playing experience.

Most Amatic games offer the traditional bonus features that are usually found in land-based casino slots, including Free Spins, Wilds, and Scatters. New Zealand players will be able to play multi-line slots titles from Amatic and some of the games offer interesting prize variations, such as big payouts for landing a screen full of the same symbol.

Some of the later Amatic games do offer a little more in terms of modern features and game-play enhancements. For example, Book Of Aztec is an Amatic game that incorporates an expanding randomly chosen symbol during free spins bonus rounds, and Lucky Zodiac provides an extra way to win in the form of ‘elements’. These more modern slots also feature a gamble-after-win option in the form of a mini-game in which players are given the task of betting on the outcome of the turn of a playing card to win bigger prizes.

Some of the popular online titles from Amatic Casanova, Admiral Nelson, Dragon’s Pearl and Frog Princess, which may be familiar to New Zealand players. The company has also released a small range of table games including roulette, blackjack and bingo. Although the overall range is small there is something there for everyone, from basic retro slots to relatively modern titles. Here are three of the most popular Amatic games you will see online. 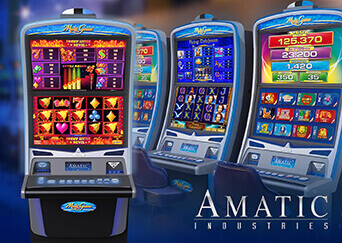 This slot is one of the more modern titles available from Amatic. As the name suggests, it is based around an astrological theme, with all the twelve signs of the Zodiac employed as symbols on the game reels. All twelve symbols are divided into three groups, representing the elements of fire, air and water, each of which is represented by a differently coloured background. If players can line up five of the same elements, an additional prize will be released, and it is also possible to trigger a bonus game in which you get a special stacked symbol and a number of free spins.

This well-known game has an obvious Asian theme and includes five reels along with four rows of symbols. It includes forty win-lines, which feature the stacked wilds bonus symbols, consisting of ornate dragons. Besides the opportunity to line up multiple stacked wilds in the basic game, players can also access the free spins round, and this can also be extended indefinitely by bringing up a pearl symbol which adds one more free spin.

Wild Respin is typical of many of the Amatic games which have a similar look though they may vary in terms of the number of lines they offer or their bonus features. This particular slot is based around simple fruit graphics and includes a bonus feature in which players can unlock multiple respins if they can land four of the same symbol on the first reel. The reels will continue to spin as long as the player keeps landing the same symbol, and when combined with the wild symbols, it is possible to pick up big payouts on this retro-style slot.

Amatic is one of the smaller operators in the New Zealand online casino sector and Kiwi players looking for the latest in high definition graphics or high-profile slots titles won’t find enough of either in Amatic’s catalogue to meet their needs. However, while their stable of games may have a retro feel, the company’s long experience in the land casino business has transferred to their online offerings as these games offer a solid, entertaining casino experience, which will be particularly enjoyable for gamers looking for a traditional casino session. And in years to come, we can expect Amatic to add some newer titles to its roster, offering New Zealand online gamers a wider choice.