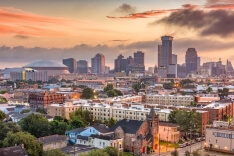 As online gambling spreads considerably across the US, which is swiftly becoming the largest and most lucrative market in the world, this is also being reflected in the revenue that is being generated by operators and states alike.

The latest news has come from the state of Louisana, which has witnessed a 584.9 per cent month-on-month increase in sports betting revenue for the month of May. This subsequently translates to a revenue figure of $22.6 million, which is a $3.3 million increase in the month of April in the state.

Such an impressive figure was led by baseball betting in the state, which amounted to $5.7 million in revenue, with this being followed by basketball at $4.7 million, $331,777 courtesy of American football and $126,440 being raked in from soccer.

Having only launched online gambling at the beginning of 2022, Louisiana is starting to show steady traction in the industry and these latest figures are certainly impressive to say that most of the major sports are at their most popular between September and March.

It is even more impressive when considering that the state does not have any major sports franchises in the key leagues - most of them being college teams, however, college betting has proven to be particularly big over the last couple of years in the state.

Despite this, it did not stop six key sportsbooks from launching almost simultaneously earlier in the year, with FanDuel, DraftKings and BetMGM (the big three), in addition to Caesars, BetRivers and Barstool securing licenses to operate in the state.

While this may not be the biggest state in terms of betting or online casino in the country, there is clearly a lot of promise as far as the potential revenue is concerned. The clear leaders in the state are ‘the big three’, courtesy of the pulling power that these have, due to being more established and having a bigger marketing budget.

The sports betting bill that was passed for the state at the end of last year allows for up to 41 online operators in Louisiana, however, it remains to be seen whether other operators could see much potential for growth, up against the bigger the companies.

With the American football season set to kick off again in September, this should only help to further increase the revenue in Louisiana over the next six months and it will be interesting to see how much this can affect the top line.

Major states such as New Jersey and Pennsylvania often see significant numbers for the NFL throughout the months of September to February and it is hoped that this could be replicated in Louisiana.

One thing for sure is, that the market has reacted well to the introduction of legal online sports betting over the last six months and there is no doubt that this could well continue based on how other states have progressed over the last couple of years.

Written for onlinecasinosrealmoney.co.nz by Adiela de Bruyn on 12-07-2022