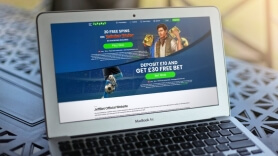 The UK online sports betting and casino market has in recent years, almost shrunk in terms of the amount of choice that customers have to sign up to an individual, privately-owned company.

After Ladbrokes merged with Coral in 2016, global conglomerate Entain swooped to buy both brands a couple of years later, while last year, William Hill was swallowed up by Caesars Entertainment. Meanwhile, when PaddyPower merged with Betfair, this was then acquired by global heavyweight Flutter Entertainment, which also owns SkyBet.

As a result, there is only really Betfred and Bet365 that are standalone brands in the UK market, however, now there is a new sheriff in town with aspirational ambitions to really carve a niche of its own; JeffBet.

An exciting alternative for the UK market

With licenses from both the UKGC (United Kingdom Gambling Commission) in addition to the MGA (Malta Gaming Authority), JeffBet has laid all of the foundations to really cement itself as a serious contender in the UK market, in a similar fashion to what Bet365 did.

Boasting a highly innovative sportsbook with a wide range of betting markets on offer, in addition to a fully serviced online casino, with games and slots from some of the best software providers in the world, JeffBet is perfectly positioned to become the next major force in the UK gambling industry.

Bet365 began in a Portakabin in the early 2000s from humble beginnings and has grown exponentially over the years into what can be thought of as the leading sportsbook in the UK - there is no reason why JeffBet, with its great branding potential, cannot do the same.

Following its launch, a spokesperson from the company indicated that there is a great opportunity in the UK market, with customers looking for even more choice and quality, coupled with better service and JeffBet could well offer this.

Competing with the best?

Focusing primarily on the UK market appears to be the main strategy for JeffBet, however, its MGA license means that there is also the possibility of making a move in certain European territories.

It is not uncommon for UK iGaming firms to have more than one gambling license - especially the big ones and this decision from JeffBet, could well work in its favour, especially if it attracts potential interest from English-speaking customers in European countries.

As more and more new markets become regulated - especially in the US (new states are having approval passed particularly frequently now), it means there is more of a global interest, which helps to raise awareness about the different number of firms that are out there.

Written for onlinecasinosrealmoney.co.nz by Adiela de Bruyn on 23-05-2022