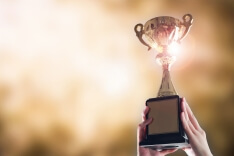 It has been somewhat of a rollercoaster 12 months for MGM Resorts International and Entain owned sportsbook and casino, BetMGM. Having expanded into numerous US states and posting impressive figures, the brand was also central to a failed takeover bid of Entain, by its rival sportsbook, DraftKings last year.

The latest revelation sees them named as online Casino Operator of the Year at the prestigious EGR North America Awards 2022 - a great honour which recognises the strength of the firm’s ever-improving online casino product.

Since its inception in 2018, BetMGM has continued to build and grow impressively on a yearly basis, which has ensured that the brand has been able to compete at the highest level on a consistent basis, in what is swiftly becoming a crowded marketplace.

A great accolade for BetMGM

For an operator whose principal service offering is first and foremost, its online sportsbook, to receive recognition for its online casino is certainly a testament to the work that has been done by this department at its headquarters - something that perhaps, many did not expect.

Going up against operators that chiefly offer online casino as their main product, such as Golden Nugget Online or Caesars, to win this is something that the company can certainly be proud of.

Indeed, in most of the states that it operates in, it is the brand’s sportsbook that appears to raise the highest levels of awareness, at least initially, however, a combination of clever marketing and also astute promotions have helped to elevate the status of its online casino.

This is especially true when considering the cross-marketing that occurs between its sports products and casino products via its website, though also through email marketing campaigns in the form of direct advertising campaigns to its customer base.

The reaction from representatives at BetMGM suggested that the team was genuinely humbled to be honoured with this award, implying that it has always been focused on delivering a product that exceeds its customer’s expectations.

It does appear to be something that is ingrained across the board, with the brand responsible for creating a series of quality products over the last couple of years, not least of which being in its online casino.

Such an award will provide the firm with a great tool to help it boost customer acquisition over the next couple of years as it looks to gain a solid foothold in the marketplace, with more and more states set to open up and further competition waiting in the wings.

Having also recently launched in the newly regulated province of Ontario in Canada, it appears that the brand is continuing to move in the right direction and position itself strategically in the industry.

While the US market will, no doubt, continue to be a priority, especially with New York still being young and a vote pending for California later this year, there is a huge opportunity to gain major consolidation in a global marketplace that will likely surpass $200 billion annually in revenue over the next five years.

Written for onlinecasinosrealmoney.co.nz by Adiela de Bruyn on 01-05-2022