Arizona set to become the leading sports betting US state 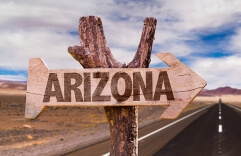 Known for being the leading producer of copper and home to the Grand Canyon, or at least some of it, there isn’t really much that Arizona can shout about. That is until now.

Almost out of nowhere, the state has surged in terms of numbers where the gambling industry is concerned. In neighboring Nevada, home to the iconic Las Vegas, the figures are understandably high, though the real surprise is in Arizona.

Albeit being somewhat of a fledgling sports betting market, it has witnessed substantial growth over the last couple of years, with a somewhat lucrative market having been developed.

While there might be some confusion as to why Arizona is now the leading sports betting state in the US (at least for now), when you think about it, this does actually make sense when you start to consider the popularity of sport as a whole in the area, thereby leading to increased betting activity.

Unknown to many, Arizona is actually a growing sports tourism market, with fans regularly travelling both across the state and country to see such events as the Super Bowl, college sports, and of course NASCAR which is particularly prominent here.

When you also factor in that many of these venues also have significant advertising of betting companies, in addition to the fact that some of them have sports betting terminals as well and this does begin to strengthen the state’s case.

Lead analyst at PlayUSA.com, Dustin Gouker recognises the potential of sports betting, highlighting the fact that Arizona in particular has a lot of factors that can see it become even bigger, stating that the framework is in place for it to appeal to a lot of sports operators in the future.

Currently, the state of Indiana, which launched sports betting in 2018 is Arizona’s biggest competitor, though according to PlayAZ, based on the population of the state, which stands at 7.3 million, projections for sports betting could see the amount placed in wagers reach $3.3 billion annually.

Following the legislation of online gambling in the states of Pennsylvania and most recently Michigan and New York, there could certainly be some challengers for the title of leading sports betting state in the US over the next few months.

Indeed, on its first weekend of legislation being approved, the state of Michigan saw explosive numbers of sports betting activity, on certain events such as the NBA and college sport. Meanwhile, the New York market has shown that it has a significant amount of potential since it had online gambling legislation passed last month and with a big sports presence in the state with various NBA, MBL, NHL and NFL teams, there is anticipated to be a huge amount of volume of bets in the coming months.

What does this mean for the US Sports Betting market?

Already we have seen a considerable amount of traction in terms of figures in what is a burgeoning US sport betting market, and by extension online gambling as well. While the likes of Las Vegas and New Jersey have provided the bedrock for the industry for years, this has since catapulted into the stratosphere in recent years as new legislation for different types of gambling has opened up.

What is being seen as a particularly credible indication for future growth is the figures that have already been released in recent months, which means that effectively, there is no ceiling in terms of how much traction that the industry can continue to gain.

Written for onlinecasinosrealmoney.co.nz by Adiela de Bruyn on 26-04-2021