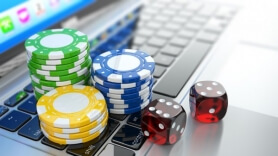 Following the [temporary] closure of land-based casinos around the world, the online gambling industry has witnessed a considerable spike in activity. This is because of a number of different reasons.

One of these is because people have been restricted to their homes, not being able to go out due to the initial lockdown at least which meant that existing online players did not have anything to do. In addition, with a lot of players being paid a percentage of their salaries to stay at home, often on a ‘furlough’ scheme, it meant that they had more disposable income in relation to fewer expenses.

Furthermore, existing gambling companies began to offer even more options to a market that they recognized as having even more potential, due to the increased demand for a range of different gambling products. However, there have also been even more brands developed by gambling companies who are completely new to the industry as they seek to capitalize on one of the fastest-growing industries of this year.

According to data analytic website Statista, the online gambling industry is predicted to be worth in excess of USD92.9 billion by 2023, which is almost double its current value. Because of the continued advancement in technology, with even newer ones being developed to cater for an increased demand, but also a growing number of newer preferences.

While the UK and European markets have led the way for the past two of decades in the online gambling industry, over the last couple of years, there has been a significant development of new markets.

One of these includes Canada, which has seen several states pass new laws to allow for the creation of Canadian online casinos as well as Canadian players to participate. Already, the Canadian online gambling industry is worth CAD16.1 billion in revenue and this is expected to rise considerably over the next few years, while it has created jobs for 182,500 permanent staff members.

A rising force in the online gambling world though is the USA. Following the legalization of online gambling in a number of key states already over the last couple of years, this is continuing to happen and a lot of signs point to the fact that even more states will pass new legislation.

It has seen land-based casino companies such as Caesars already make plans to cement their place in the US online gambling market, following the acquisition of UK gambling giant William Hill in the last quarter of 2020 which was a significant coup.

This has even paved the way for European online gambling behemoths to spread their reach to the US and many have already started making in-roads with new partnerships. Recently online gambling Swedish software provider NetEnt secured an alliance with US online gambling firm Coolbet based in Pennsylvania.

New Zealand is another fast-growing market in the world of online gambling. Global casino sites have witnessed a significant amount of traffic coming from the country and as a result, this has yielded statistics that 80 percent of New Zealand citizens gamble in some format.

There are bound to be many more new markets that make a statement in this industry over the next few years and certainly Africa is one to keep an eye on, especially if this becomes more of a regulated market.

Written for onlinecasinosrealmoney.co.nz by Adiela de Bruyn on 28-12-2020