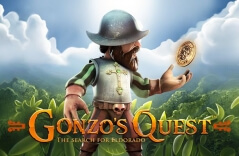 There are a few slot games that managed to define the casino industry. And one of these games is Gonzo’s Quest by Netent which is now live at Casumo Casino. Based on the story of Gonzo the explorer, Gonzo’s Quest follows the adventure to discover the lost city of El Dorado and the gold that come with it. With a theme that’s based on pseudo-historical location, it’s only natural that the game boasts several exciting elements that engage players. Indeed, Gonzo’s Quest by Netent delivers with its impressive visuals and a jackpot of up to 2,500 times your bet!

This 2020, Gonzo is back in a game that’s bigger and better. Better because the game comes with improved graphics and themes. And it’s bigger because this game is more lucrative compared to its predecessor and now available with the Megaways mechanic! That’s right, the newest version of Gonzo’s Quest comes with up to 117,649 Megaways payline and a jackpot of up to 20,000 times your bet! Now, that’s one massive game to play at Casumo Casino.

As a new slot game to play at Casumo Casino, it’s understandable that this game gets the spotlight on its games lobby. This game is live on Casumo Casino since July 23, 2020, and it’s getting the attention of all types of players. And what’s more exciting is the news shared by Casumo that Gonzo’s Megaways has become a payout machine on the platform. Since it release on July 23, the game has been busy rewarding players with wins. And as of this writing, the biggest payout given to a player is €64.679,00! Now, that’s a mega way to announce the release of a new slot at Casumo Casino.

As of this writing, there have been 20 big winners at Casumo Casino. For a complete list of players and their big wins on Gonzo’s Quest Megaways, check out the Promotions page of the casino.

In this latest game from Red Tiger Gaming, players can count on a bigger, bolder, and more exciting slot game to play. As a Megaways slot game, it comes with up to 117,649 paylines. More importantly, the game rewards you with an impressive jackpot of up to 20,000 times your bet! So, are you ready to join Gonzo in his next adventure?

Written for onlinecasinosrealmoney.co.nz by Adiela de Bruyn on 29-08-2020

Since 2017 OnlineCasinosRealMoney.co.nz is one of the leading casino portals in New Zealand. This site is kept up to date by 4 professionals, including ex-operators and trained (online) casino players. If you choose a casino from our website we guarantee the best NZ casino offers and experience for New Zealand players. If you have any question in relation to online gambling, feel free to contact us and we will be more than happy to help! © 2018-2020 Onlinecasinorealmoney.co.nz