Playtech was one of the original software developers to provide games for the online gaming industry. Throughout this century, it has expanded along with the industry and established a reputation as one of the world’s foremost providers of casino and slots games.

The company was founded in Tartu, Estonia, in 1999, by Teddy Sagi together with experts and associates with backgrounds in the casino, software development and multimedia industries. Two years after their launch, Playtech were able to open their first online casino, which was followed by Bingoland network in 2003 and the iPoker network twelve months later. In 2005, the Random Number Generator (RNG) used in Playtech games was given the stamp of approval by Technical Systems Testing (TST), and since then, the company has expanded its games development operation to provide numerous titles for other operators.

In recent years it has become one of the world’s foremost international designers, developers and licensors, producing countless web and mobile app titles to the online gaming industry, including well-known names such as William Hill, Ladbrokes, Bet365, Snai and Sisal.

In 2006, the company launched successfully on the AIM stock exchange and was valued at roughly US$ 950 million. Having gained approval from the Alderney Gaming Commission in 2010, Playtech gathered numerous awards and is internationally renowned for its games.

New Zealand has seen a dramatic expansion in the popularity of online casino gaming in recent years and the Playtech name is well known to Kiwi players as its software features in many of the nation’s favourite slots titles. Playtech casinos have a reputation for providing excellent customer service, along with a wide selection of the latest titles, and most also allow New Zealand players to make withdrawals and deposits in NZ dollars.

Playtech has established a reputation for being at the cutting edge of online casino gaming and has set new standards in creating high-tech titles that feature attractive themes, state of the art graphics, and immersive gameplay.

They have been able to do so partly because they have focused on creating cinema-quality graphics as well as establishing relationships with famous entertainment corporations. Playtech has managed to secure licensing deals with such well-known media giants as HBO, MGM and NBC Universal, and this has made it possible for them to produce games based on the biggest blockbuster Hollywood films and most popular TV shows. The benefits of these deals are particularly apparent in Playtech’s range of slots games titles, which include the famous Marvel Slots progressive jackpot, which is popular with New Zealand players. 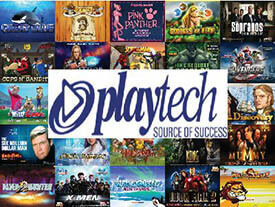 Playtech’s dominant position in the online casino gaming market is also partly down to the huge range of titles that it is able to offer. Playtech currently has over 500 games in its digital portfolio and that number is rising all the time.

Although Playtech is probably best known among New Zealand players for its variety of slots games, which include some of the most cutting-edge video slots and progressive jackpot titles you can find online, it has also helped to lead the way in live online casino gaming. Playtech was one of the first software companies to produce live dealer titles, which allow players to enjoy the genuine casino atmosphere through a live connection using their webcam. The company offers a number of live games that are popular with Kiwi players, with Live Roulette, Live Blackjack and Blackjack Switch top of the list.

As you would expect, Playtech also does well with its table games and offers a comprehensive selection of all the most popular table game titles, along with sports betting options and video poker. Playtech games can often be accessed through instant play using the Playtech Flash casino, or via software downloaded from the Playtech site.

As the smart phone revolution has taken off in New Zealand, online casinos have been striving to make sure that all of their slots titles and table games work effectively on a range of mobile devices. Playtech was among the first gaming software developers to spot the potential demand for mobile-friendly games and over the years they have established themselves as one of the world’s leading mobile title creators, assisted by partnerships with several technology companies specialising in the mobile sector.

The typical Playtech game is designed to be compatible with many types of mobile devices, and is usually playable through a mobile browser or by using the online casino’s app.

One of the benefits of using Playtech-supported casinos is that they are well suited to the New Zealand market. A typical Playtech casino will have the technology to cope with all of the most popular New Zealand payment methods, including credit and debit cards, Skrill, Paypal, SagePay, SecurePay and Coinbase. Just as importantly, Playtech-based casinos will usually support transactions in NZ dollars, so there is no need for Kiwi players to use currency exchange sites before they are able to make a deposit.

New Zealand players will also be reassured by Playtech’s reputation for providing a safe and secure gaming solution. Its software is frequently updated as new online security technology and safeguards become available, so anyone playing a Playtech casino in New Zealand can feel reassured that their financial transactions and personal data are well protected.

Playtech’s position at the top of the online casino gaming market has been achieved over many years. Having spent nearly two decades producing online casino games, they have the insight to meet the requirements of online gamers, and their cutting edge software, including popular themed slots titles and multi-million dollar progressive jackpots, are played and enjoyed by thousands of casino players across New Zealand.

Known for bringing the latest hi-tech slots titles to the online gaming community, Playtech also have a reputation for security and safety. The growth of the New Zealand online casino sector has encouraged a few unscrupulous operators to launch disreputable and unsafe sites. For New Zealand-based players searching for a secure and dependable casino, the Playtech name is a mark of quality and security that they can depend upon.