Novomatic was founded by Johann Graf in 1980. Prior to that date he had been involved in importing pinball machines from Belgium with his partner Gerhard Brodnik, at one point earning the license to supply machines to a major British casino company. Soon after setting up Novomatic, Graf hired a team of technology experts and began to develop their first line of gambling machines, known as Admiral. Within a year the company was supplying its products to Netherlands, France, Switzerland and Germany.

In the decades since, Novomatic has become a familiar name in the gambling industry thanks not just to the commitment of Graf but to the company’s team of expert game developers. Novomatic products are today used by a wide range of well-known casino organisations including BetVictor, Energy Casino, Quasar Gaming Casino and OVO Casino.

In September 2011, the company made the move online, keen to replicate their land casino success in the digital realm. They took over software development company Greentube Internet Entertainment Solutions and began to develop its own line of online game. Despite the fact that they were entering the online casino market later than some of their rivals, Novomatic managed to build up a significant presence in the online gaming sector, attracting the attention of gamers with a string of innovative casino titles.

Novomatic has established a strong base in Europe, where its physical machines are popular with land casinos, but with a global workforce of over 24,000 and a presence in 80 countries, the company has also established itself internationally. Its software powers a number of well-known online casinos and most New Zealand online casino gamers will have enjoyed playing a Novomatic game at some point.

The company has also managed to continue its growth through a number of strategic acquisitions over the years. The largest of these was its takeover of UK company Astra Games in 2004, but it has also acquired subsidiaries such as Stakelogic, AbZorba and Bluebat Games, which have helped to add to the Novomatic’s pool of creative talent, increased its audience share and helped it to develop new games. 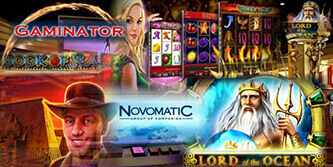 While many online casino game developers carve out a niche for themselves by excelling in one area or another, Novomatic has succeeded by being an all-round operator. Their long experience in the gambling industry has given them an insight into what makes a good casino game, and has also given casinos and players confidence in their reputation.

And by focusing on quality rather than quantity in its game design, Novomatic has been able to produce a range of innovative and immersive titles that have captured the imagination of players in New Zealand and around the world. Many of these games employ cutting-edge graphics and a host of player-friendly bonuses and features.

In a relatively short space of time, the company has developed an impressive catalogue of games. The company bases its slots games on the Motorola Coldfire Processor which offers a solid, reliable foundation to build top quality online games.

It’s fair to say that Novomatic are best known for their slots games. They have around forty in their stable, including a number of classic three-reel titles as well as the latest multi-payline and twenty-five reel games. Although the company does not produce progressive jackpot games that can offer multi-million dollar payouts, it is possible to win big prizes of up to $195,000 on some of their slots games, and its Golden Sevens and King's Treasure slot games offer the possibility of significant payout rewards.

One popular feature of Novomatic games is the ‘gamble’ option which is incorporated into a number of their titles and enables players to increase their payouts, while Novomatic titles are also known for offering a generous number of free spins.

Perhaps the most famous Novomatic game is Book Of Ra Deluxe, which will be well known to New Zealand online gamers, and which has a loyal online following. This is a classic example of a game that was hugely popular in land casinos before it was converted to the online world, and Novomatic have done a great job in recreating the original physical incarnation of the title, thanks to high quality graphics and immersive game-play.

Novomatic has not been left behind by the mobile gaming revolution and you can find most of their famous titles, including Book Of Ra and Dolphin’s Pearl Deluxe, available to play on Android or iOS devices. GreenTube have done a good job of translating the desktop versions of these games to mobile and most of the games feature high quality graphics and evocative sound effects. You can also find a host of other Novomatic games including poker, bingo and a selection of table game titles, among Novomatic’s mobile catalogue.

For New Zealand gamers, security and fairness are important factors to consider before using a site and Novomatic place a high value on the integrity of their games. Before any site can use a Novomatic game, they have to gain certification from leading accreditation organization eCOGRA, and most sites powered by Novomatic are required to employ SSL-encryption in order to protect the financial and personal data of users.

There are software developers who can offer a wider range of titles than Novomatic but few of the world’s major game providers can match the Austrian company for its all-round performance. Thanks to its roots in the land casino world, Novomatic has grown its online casino gaming business by focusing on providing genuinely entertaining slots titles that are beautifully presented and packed with features, to keep players coming back for more.