The company was founded by Len Ainsworth as a games machine manufacturer in 1953. Over the years it grew in size and stature, achieving a notable milestone in 1996 when it was listed as a public company on the Australian Stock Exchange. Ainsworth subsequently moved to chair another high profile gaming company, Ainsworth Game Technology, but the Ainsworth family retain a large stake in Aristocrat to this day.

With the knowledge and expertise that comes from over sixty years of experience in the gaming industry, Aristocrat has become a well-respected and diverse company, employing over 2000 staff in its offices across the world, including in the United States, South Africa, Japan and Russia, though the majority of its games research and development is still carried out in the North Ryde suburb of Sydney.

Aristocrat has won licenses to distribute physical games machines in more than 200 regions and since 2009 has increasingly focused on the United States market and on developing its online and mobile gaming software content.

Aristocrat has long been considered an industry leader in casino gaming and many of the players who enjoyed its physical gaming machines have switched to play the online versions of those same games. The company has transferred many of its popular slots titles to the online sphere, including 50 Lions, Where’s the Gold, Choy Sun Doa and Queen of the Nile. 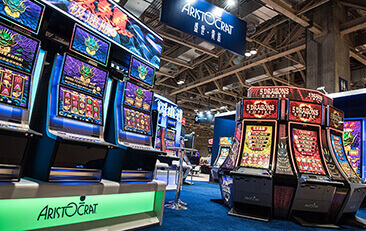 All of those games have been popular with New Zealand players, but of all the Aristocrat titles, it is probably Queen of the Nile that is regarded as the archetypal Aristocrat game and the one that did most to build its reputation. The combination of an Egyptian theme and thrilling game play have captured the imagination of millions of online players.

Among the other popular Aristocrat games that New Zealand players are likely to come across are Pompeii; a 5 reel, 25 pay line slots game themed around the tragic ancient Roman city of Pompeii that offers 243 chances to win, and Miss Kitty, a cat-themed title that provides a fun gaming experience, complete with an entertaining sound track, and an impressive array of bonus features including free spins and sticky wilds.

Aristocrat also has a reputation for producing big money jackpot themed games that are immense popular. In particular the Jackpot Carnival and Cash Express linked games have attracted players in search of a big win and can generate huge prizes.

Most of the Aristocrat titles are available through instant-play and while the graphical style is typically fairly simple, the clean layout and design, along with the classic evocative casino slots sound effects make for a compelling game play experience. Playing on an Aristocrat powered online casino is probably as close as you can get to experience the flavour of playing Vegas slots without having to catch a flight from Auckland International!

No software development company can afford to ignore the mobile gaming revolution and Aristocrat has extended its technology to embrace the mobile sector. Many of its most popular games have been made available on iPhone, iPod and iPad through the App Store, though not all of Aristocrat’s mobile games can be played for real money.

With such a competitive online casino gaming market, it can be difficult for software development companies to stand out from the crowd, but Aristocrat’s roots in the land casino business have helped it to carve out a distinct reputation. The ethos behind most of their gaming products seems to be based primarily on meeting the needs of casino gamers, rather than attempting to dominate the market through sheer quantity of titles.

Although they were relatively late to the online gaming sector, the company appears to have taken the distinctive requirements of online casino gaming seriously and have recruited some of the gaming software world’s most talented individuals. By focusing on the development of high quality, entertaining online titles and combining this with their decades of casino know-how, they have been able to build a strong reputation among online casino players.

Aristocrat has expanded in several directions, and the sheer diversity of their casino-related operations has helped to make them a stable and significant presence in casino gaming. As well as supplying physical casino machines to gaming operations, they have developed their own range of interactive video terminal systems and gaming solution technology.

They have also been responsible for a number of gaming innovations, including their patented linked jackpot Hyperlink system and their Reel Power system, in which players purchase reels rather than lines whenever they play. The company also provides a range of technological support solutions for casino gaming products, including maintenance, repairs and logistics.

Aristocrat makes its online content available to operators through their remote location gaming server, or through direct deployment, and this flexibility has helped to make Aristocrat a popular partner for many of the casinos enjoyed by New Zealand players.

From humble beginnings, Aristocrat has expanded to become one of the online casino gaming world’s best all-round companies. Their continuing work in the land casino sector has helped them to keep in touch with a wide range of clients and players throughout the industry, and this experience has informed the development of a roster of online games that are enjoyed by New Zealand players today. With such a strong base and commitment to producing player-friendly games, Aristocrat is a firm favourite in the online gaming community.