Scratch Cards are one of the oldest and most popular methods of gambling in the world. For players in New Zealand they have seen a lot of change over the years. With humble beginnings all of the way up to the technological marvels that they are today. Keep reading to learn more about what we have discovered about scratch cards and what they can offer to players. 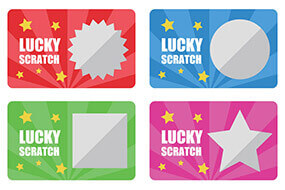 How to Play Scratch Cards

This is obviously the most important aspect when it comes to scratch cards. What is available to win. Well, there are a big range of different prizes actually. These are just some of the types of prizes that you can expect to see when playing scratch cards.

These are prizes that are set at a certain level. If you win the big prize, then you will get a specific amount that never changes. So whether it’s the first scratch card that is sold or the millionth, the prize will remain the same. These are the most common kinds of scratch cards that can be found. They normally have a set cost in place for each fixed jackpot that’s offered.

Fixed jackpot scratch cards were the first to appear on the market and were the first to really gain any kind of popularity. They are still the most popular now, but the other forms of prizes are beginning to catch up slightly.

These are rarer than fixed jackpots and they offer a slightly different prize to players. They are called lifetime jackpots because they offer a prize to players over their lifetime. An example of this could be that the winning player will be awarded a prize of $10,000 every month for the rest of their life. Of course, most of these prizes will have some kind of caveat in place such as the prize is only awarded for a maximum of 30 years, but even with this in place it’s still a good prize.

The size of these prizes can often be a fair amount smaller than fixed jackpots at first glance, however over the lifetime of the prizes these can still award a decent sized jackpot. Using the previous example over the course of the 30 years the player would be awarded $3.6 million. Which is definitely a good sized prize.

These are probably the rarest prize that’s offered with scratch cards. Progressive jackpots are jackpots that continually rise until they are won. As such there is no maximum limit for how much can be awarded. On top of this, as the prize gets bigger it also tends to cause more players to purchase them. This in turn will cause the prize to grow even larger.

There are two kinds of scratch cards offered to players. The first is the traditional kind. This is essentially a piece of card that has a removable foil on the front. When this foil is scratched away it will reveal a number of symbols and game rules. Depending on what is revealed on the card then a win might be awarded. These are the most common and most well-known form of scratch card that’s available at the moment. Even people who don’t tend to play scratch cards very often will be familiar with this form of scratch card.

The second type of scratch card is an electronic scratch card. This is normally offered to players at online casinos in the form of a casino game. While they may look similar to video slots at first glance, they are quite a bit different. They basically work like an electronic version of a traditional scratch card. Players will either use their mouse cursor or swipe with their finger in order to reveal what’s on the scratch card.

These cards will offer a number of different fixed jackpots to players but they also have progressive jackpots available. As already mentioned these offer much higher wins to players and can end up being much more lucrative for players. What also makes electronic scratch cards different to traditional ones is that the stake can sometimes be modified. So, players may be able to play the same scratch card but with a range of different stakes. It means that players with different budgets will be able to enjoy the scratch cards to a level that suits them.