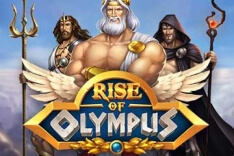 At Royal Panda, registered players are treated not just to a wide selection of casino games and jackpot titles. All customers of the platform are given equal chances to play for instant wins and massive prizes. With a wide range of top slots titles from popular vendors like Play n’ GO, Yggdrasil, and Pragmatic Play and a Random Number Generator (RNG) that is regularly assessed, customers have an attractive environment to enjoy and play for the jackpots.

And this is exactly what happened to a lucky customer of Royal Panda last February 19. A customer named Marc from Germany hit the lucky spin while playing a popular slot game on the website, the Rise of Olympus slot game. According to a press release posted on the website, this Royal Panda customer collected €74,000 as his jackpot for playing the Olympus-themed slot game. What’s interesting and inspiring about this development is that Marc managed to win the bonanza on his first day of membership at Royal Panda! We can say that the gods of Olympus certainly worked their wonders in favor of the player!

It was one of the most exciting wins recorded at Royal Panda in recent months. In a statement, the casino shared that Marc signed up for an account last February 19th and during this time, he chose the Play n’ GO title. The player started with a deposit worth €800 to initially fund his account. From this amount, he wagered €10 on the game. The jackpot was not activated on the first spin. During his real money play, he initially earned a total prize of €1,571 and this started the streak. While playing the game, he managed to collect massive wins starting with €13,230 for a bet worth €40 and another €44,000 for a wager worth €100. This streak of massive wins is one of the best prizes ever recorded in recent months.

When Marc decided to end his day after playing the game, his account showed a total jackpot worth €74K. Royal Panda has already congratulated the player for his feat and the management expects more players to follow suit.

In this Play n’ GO slot presentation, you will join the gods of Olympus in search for the prizes and jackpots. In this grid-type slot game, the important gods of Olympus act as the most important symbols. You can boost your winnings if Hades, Poseidon, and Zeus utilize the ‘Hand of God’ to create a wave of fortune. Each god in this game has a role to play that makes this a colorful slot presentation. Poseidon will offer more wilds, Hades will take out non-winning symbols, and Zeus can help create a more winning combo. Another exciting feature is the ‘Wrath of Olympus’ which offers an exclusive bonus for the players.

Written for onlinecasinosrealmoney.co.nz by Adiela de Bruyn on 27-02-2020